Way back in 2003 or so, Tessa and I played together in the Astoria Festival Orchestra – it was my very first real orchestra gig and I had a great time playing 2nd flute while Tessa played principal in our little classical period orchestra.  We played Mozart’s 25th symphony (I think?) and various other pieces.

This year, I got to work with Tessa again in a very different (but equally as fun) context: we created a new website for her.  Her old site had lasted many years, but it was build partly using Flash and it was fixed-width and needed better UX for updating things like events and workshops.

The design emerged out of a collaboration between the three of us – as we were working on establishing a color scheme, we ended up with a sort of Mondrain-esque layout as a result of a sketch I’d made in Photoshop to illustrate the relationships of the colors we were considering.  The idea stuck, and Tessa loved it. We retained a couple of fun design elements from the previous site, such as a bit of animation within the navigation menu, and Tessa’s own drawing of the tree as a “signature” graphical element.

One of the main functional features of the site is a custom-developed event management system, so Tessa can enter her performance dates and details easily as they are booked, and the same system can also handle classes and workshops. As events pass, they’re automatically removed from “upcoming” event lists and moved to a “past events” page, which can show prospective concert programmers  the breadth and history of Tessa’s musical performances.

As usual the site is built in WordPress, so Tessa can easily and intuitively maintain it herself on an ongoing basis, and it’s responsive.  Check it out here. 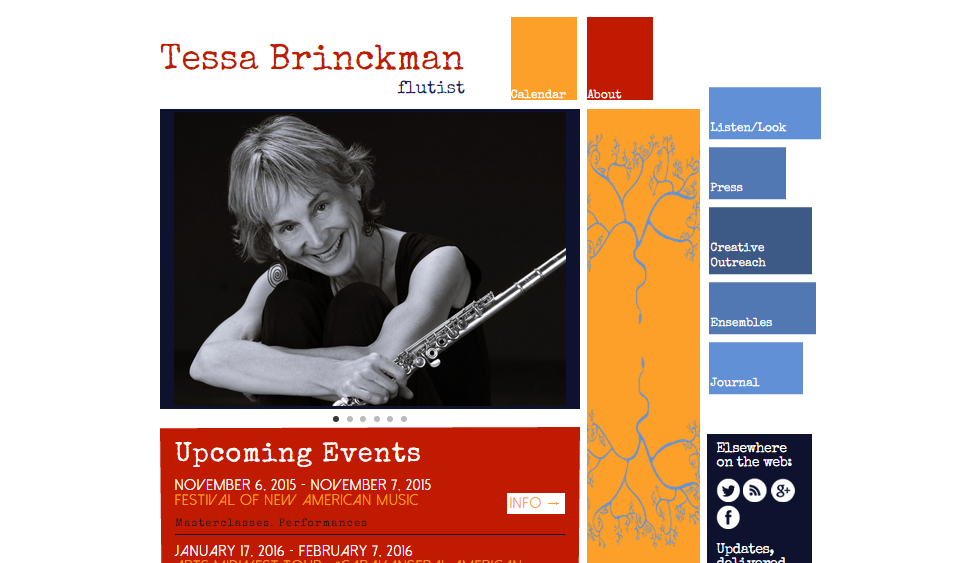